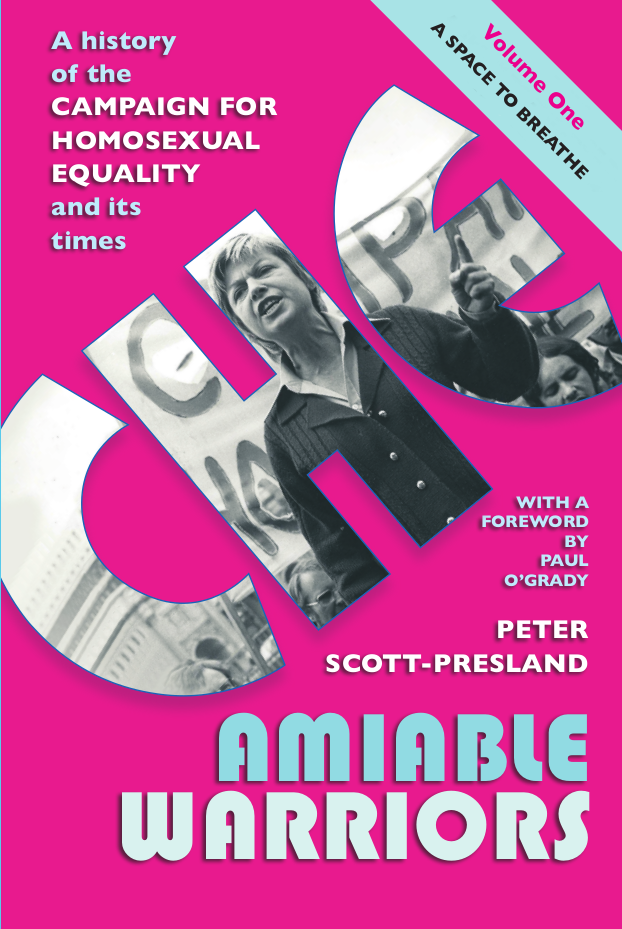 Amiable Warriors is being published in three volumes over the next few years. Volume One, A Space to Breathe was published in February 2015, by Paradise Press.

Buy it now on Amazon!

Hear Peter Scott-Presland talking about gay life in Oxford in the 1970s.

Read his keynote address to the Manchester Conference.

Read the reviews of this book by Rictor Norton and Brett Humphreys.

This wonderful book celebrates those early days of CHE and honours those brave pioneers who weren't afraid to speak out in the fight for Equality in what were unenlightened times. I'm proud to have been there.
— from the Foreword by Paul O'Grady

The Campaign for Homosexual Equality (CHE) was at one time the largest LGBT organisation the UK has ever seen. Founded in Manchester in 1964 as the North Western Homosexual Law Reform Committee (NWHLRC) it was active in the campaign that resulted in the partial decriminalisation of sex between men in 1967. Thereafter it changed its name, broadened its aims, and became a nationwide organisation providing social groups around the country as well as continuing to fight for full equality for LGBT people.

Some truths and myths about CHE.

Responsibility for the continuing Amiable Warriors project passed in October 2022 to the CHE Research Trust (CHERT) which was set up by CHE as a registered charity, to inherit the bulk of CHE's assets, and promote research and publication into LGBT history. For full details, see the CHERT website.

Amiable Warriors is a major contribution to a neglected area of British social history, highlighting the major personalities involved, set against the currents of thought and activity of the time. Volume One, A Space to Breathe, traces CHE from its origins in 1964 as a small law reform committee in Manchester to the point where it had become a nationwide grass-roots campaign with local groups in London and elsewhere.

Peter Scott-Presland is a writer, actor, playwright and director and runs the gay theatre company Homo Promos. He writes about CHE having joined it and left even more times than the Labour Party. Having performed as a cabaret artist at many CHE events, and known many of the participants personally, he brings a quirky dramatist's and journalist's eye to animate a subject which is far, far more than a set of campaigns.

Ross Burgess is secretary of the CHE Research Trust and was commissioning editor for Volume One. He previously edited Diverse Performances by the late David Haldane Lawrence, and has been involved in editing or publsihing several other books, mailnly through Paradise Press.